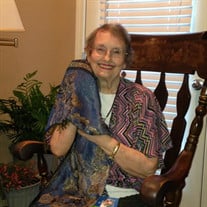 Judith Ann Prestridge, nee Henderson, affectionately known as "Judy", age 81, peacefully departed this earthly life in the early hour’s of March 30, 2022, at home surrounded by her loved ones. Since 2016 she resided in Cleveland, AL after moving from her home of many years in Alabaster, AL. where she was an active member of the First Baptist Church. Raised in Pascagoula, MS, and graduate of Pascagoula High School (c/o 1960), she was making plans to attend their upcoming reunion in April before illness overtook her. Judy earned a paralegal degree from Samford University and retired from the law firm of Maynard, Cooper & Gayle in 1990. Judy had two enduring passions; art and travel. After retirement, Judy served as a docent at the Birmingham Museum of Art, sharing her knowledge of art with museum-goers for several years. The family is fortunate to have numerous, beautiful, original paintings by which we can cherrish her memory forever. Judy was blessed by the opportunity to visit many interesting places, including most U.S. States, Scotland, Mexico and several Canadian provinces. Judy was the widow of Roger H. Prestridge (d. 2012). She was predeceased by her mother, Mildred Rowan Henderson; father, Neiman J. Henderson, brother, Colin Henderson, and sister-in-law, Bianca Henderson. She was survived by her children: Jessica Rowan Guthrie- Hudson (Chris Hudson), John Talmadge Guthrie III “Ty” (Cindy Guthrie); grandchildren: Jesse Graham, Sarah Graham-Jenkins (Latrell Jenkins), Andrew Guthrie, Joey Guthrie, Christopher Hudson Jr. (Hannah Bowersmith), Kaitlyn Hudson, Katie Dillard, Cody Dillard (Faith Dillard) great-grandchildren: Kaylin, Khloe, and Cooper Guthrie, Heidi Dillard, and Grayson Pennick; former daughter-in-law: Dana Guthrie (Keith Humphrey), brothers: John Henderson and Tony Henderson (Rachel Henderson) numerous other cousins, nieces, and nephews, and her life-long best friend, Rose Horn Dupre of Pascagoula, MS. The family would like to extend our most sincere gratitude and appreciation to our cousin, Terry Callahan, for going above and beyond in her untiring support in the last phase of Judy’s life. We would like to thank the staff of Brookwood Baptist Medical Center, 7th floor, for the many times they cared for Judy, with special appreciation for Dr. Jitendra Sharma, who first diagnosed her, and Dr. Natalya Belotserkovskaya (aka Dr. B), who became her specialist, both of Brookwood Neurology; Dr. David J. Mooney and his excellent and responsive staff at Hematology & Oncology Associates of Alabama; and Dr. William Sides of Gardendale Primary Care. We very much appreciate Comfort Care Hospice for their kind attention in the final days. Over the previous four years, Vivian Williams, and Pat Lynn of Visiting Angels have been Judy’s angels indeed, assisting her in maintaining her independence at home and taking her wherever she wanted to go. Services will be held at Perry Funeral Home, 1611 East Bypass Centre, AL 35960, on Saturday April 2 at 11:00 a.m. followed by a procession to Mt. Lookout Cemetery, and short graveside service. All friends and family are welcome to attend either or both.

Judith Ann Prestridge, nee Henderson, affectionately known as "Judy", age 81, peacefully departed this earthly life in the early hour&#8217;s of March 30, 2022, at home surrounded by her loved ones. Since 2016 she resided in Cleveland, AL after... View Obituary & Service Information

The family of Judith Prestridge created this Life Tributes page to make it easy to share your memories.

Send flowers to the Prestridge family.