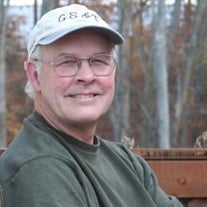 Obituary for Roger Dale Griffeth Roger Dale Griffeth age 71 of Cedar Bluff passed away Saturday September 19th at Floyd Medical Center. The family will hold a visitation from 1 until 3 PM CST Saturday September 26th at Perry Funeral Home. Survivors include wife, Cathy Griffeth of Cedar Bluff; daughters, Heather (Jeremy) Soukup of Taylorsville, GA, Katie (Jason) Wright of Smyrna, GA and Robin (Brian) McCormick of Bethlehem, GA; brothers, Butch (Peggy) Griffeth of Fayetteville, GA and Larry (Cindy) Griffeth of Eatonton, GA; sisters, Jean Martin of Savannah, GA and Candy (Phillip) Shipley of Rutledge, GA; 10 grandchildren; several nieces and nephews. He was preceded in death by his brother, Steve Griffeth and Patricia Kincaid. Roger is a veteran of the Vietnam War. He was a Sargent in the Air Force and served his country honorably from September 8, 1967 to August 31, 1971. Roger was proud to work as Engineer for Norfolk Southern for 30 years. He was Chief Financial Officer of the United Transportation Union and UTU Insurance Association. Later in life, Roger was a licensed Real Estate Broker. Among his many accomplishments in community service, he was a Chapter Manager of Cherokee County Red Cross. Mr. Griffeth was a native of Maryville, TN and the son of the late Cecil and Dorothy Landers Griffeth. In lieu of flowers, the family is asking for consideration of donations to be gifted to the Cedar Bluff and Gaylesville Fire Department to pay tribute to their community service. Donations will be collected at the funeral home honoring Roger's life. Out of town donations can be made payable to Gaylesville Fire and Rescue and mailed to PO Box 345, Gaylesville, AL 35973. Perry Funeral Home Directing www.perryfuneral.net

The family of Roger Dale Griffeth created this Life Tributes page to make it easy to share your memories.