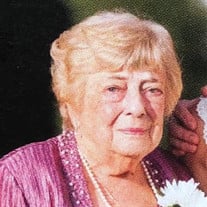 Mrs. Ruth Cobia Summers, 97, of Cedar Bluff, passed away Saturday, September 12, 2020, at her residence. Due to the COVID-19 pandemic, funeral services will be private and limited to family. Officiating the funeral serves will be Dr. George... View Obituary & Service Information

The family of Ruth Cobia Summers created this Life Tributes page to make it easy to share your memories.

Send flowers to the Summers family.